Blood
Scott Richard Hoying (born September 17, 1991) is a singer, songwriter and pianist, and the leader of Pentatonix.

Hoying has been performing since the age of 8. Hoying graduated from Martin High School in 2010, located in Arlington, Texas. Hoying went to University of Southern California where he joined the SoCal VoCals, a popular and accomplished campus a cappella group, but did not stay with this group. He later asked his friends, Mitch Grassi and Kirstie Maldonado, to audition for an a cappella show called "The Sing Off" (the 3rd season). They decided that they needed two more members, so they added Avi Kaplan for bass and Kevin Olusola percussion (beatboxing). They called their group Pentatonix, as suggested by Scott, and is named after the pentatonic scale, a musical scale or mode with five notes per octave. The group believed that the scale's five notes matched their membership. They replaced the last letter with an 'x' to make it more appealing. They ended up winning the show, their victory earning them $200,000 and a recording contract with Sony Music

Currently Pentatonix travels all around the world to perform at sold out shows.

Hoying, along with the rest of the members of Pentatonix and their producer Ben Bram, won two Grammys, one for their "Daft Punk" medley, and one for their cover of "Dance of the Sugar Plum Fairy", both under "Best Arrangement, Instrumental Or A Cappella" and the group made a cameo in the movie "Pitch Perfect 2".

In August 2013, Grassi and Hoying formed a vlogging channel called "Superfruit", where they release videos every Tuesday. The channel has surpassed 1 million subscribers during the week of Christmas 2014, and continues to grow. They have collaborated with many famous personalities such as Tyler Oakley, Grace Helbig, Tori Kelly, Miranda Sings, Todrick Hall, Mamrie Hart, Maisie Williams, and Victoria Justice.

To date, three of their many musical covers on the channel ("Frozen Medley feat. Kirstie Maldonado", "Beyonce", an "Evolution of Miley Cyrus") have garned more than 11 million and 10 million views respectively.

On the same date, they released the two EP's as a compilation album, which feature all 14 tracks, plus 2 bonus tracks: "Everything" feat. Inara George, and "Future Friends" remix made by Brian Robert Jones Choir. 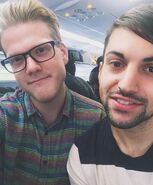 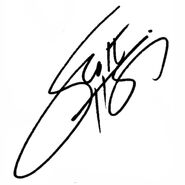 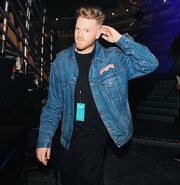 Retrieved from "https://pentatonix.fandom.com/wiki/Scott_Hoying?oldid=7525"
Community content is available under CC-BY-SA unless otherwise noted.