Her mother is Spanish-Italian, while her father, Michael Cisneros, is Mexican. She is a National Hispanic Scholar and was a sophomore Music Theater major at The University of Oklahoma before joining Pentatonix.  She developed her vocal and performance skills during her eight years as a touring member at Theatre Arlington where she’d learned to sing eight-part harmonies.

She began her classical training during high school and was a member of the Texas All State Choir for three years. As a four-year show choir member and dance captain, Kirstin held numerous roles in local stage productions, performing at shows around the Metroplex, including Casa Manana and Bass Hall." (quotation from the official website)

Maldonado used to date Mitch Grassi and Scott Hoying (members of Pentatonix) in high school, before they broke up and left on good terms.

Maldonado has been dating Jeremy Michael Lewis for three years. They got engaged on May 29, 2016. They were supposed to get married at the end of November 2017, but the wedding has been postponed for unknown reasons.

She has two huskies named Olaf and Pascal. Both dogs are named after Disney characters - Olaf from Frozen and Pascal from Tangled.

In 2019 she got a third dog, a Pomeranian named Floof. 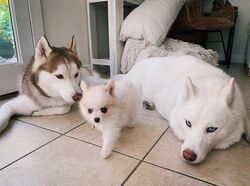 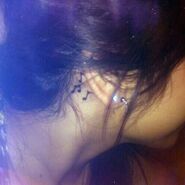 Her first tattoo was three music notes behind her ear.

Her second tattoo was of her favorite Bible verse “Philippians 4:13” on her right wrist. The text of this passage is: "I can do all things through Christ who strengthens me".

Her third tattoo was a skeleton key on the back of her left ankle.

Her fourth tattoo was a crescent moon on her right wrist. She got the tattoo on May 3, 2016, from artist Hunter Urscum. Her friend got a matching one.

Her fifth tattoo was a quote on her left forearm that reads: "The greatest thing you’ll ever learn is just to love and be loved in return".

Her sixth tattoo is a portrait of her dog Olaf on her right forearm. She got the tattoo by artist Stefano Alcantara in August 2016.

Her seventh tattoo is an owl entwined in branches on her right shoulder. She got the tattoo by artist Stefano Alcantara.

Her eighth tattoo is a rose on the inside of her right index finger. She got the tattoo in July 2017, from artist Romeo Lacoste. It is inspired by the character Rose from Titanic.

Her ninth tattoo is a mouth with vampire fangs and little upside hearts instead of drops of blood. She got the tattoo on October 13, 2017, from artist Romeo Lacoste. It is inspired by Interview with the Vampire is one of her favorite movies.

i Date My Boyfriend Scott Hoying 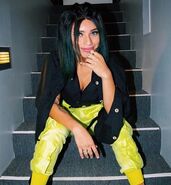 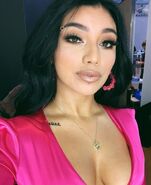 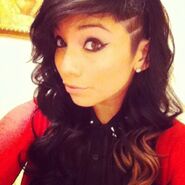 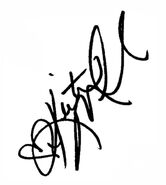 Add a photo to this gallery
Retrieved from "https://pentatonix.fandom.com/wiki/Kirstin_Maldonado?oldid=6697"
Community content is available under CC-BY-SA unless otherwise noted.